The bar graph below shows percentage of population living in urban areas in 2003 and 2030 (estimated). 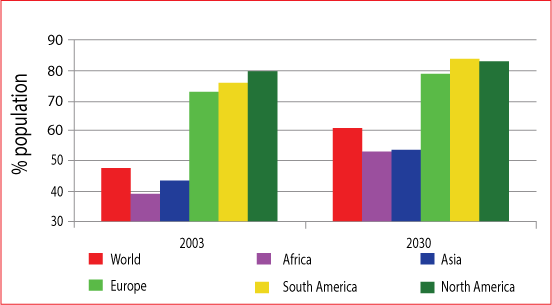 The bar graph presented compares the urban area population in five continents in 2003 and also gives prediction for the year 2030. As is seen in the graph, American and European countries had far more percentages of urban population in 2003 than that of African and Asian countries and in 2030 more people will live in urban areas that they did in 2003.

The prediction of the graph estimates that the city dwellers world-wide in 2030 will be just above 60%. In this year the city living populations’ percentage in Asian and African countries will be above 50% while more than 80% people in American continent will live in urban areas. Just below 80% population in Europe will live in different cities in 2030.