The graph below shows the amount of money spent on books in Germany, France, Italy and Austria between 1995 and 2005. 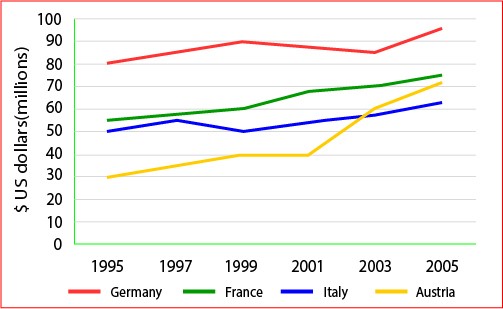 Sample Answer:
The given chart gives data on the expenditure on books in four different European countries from the year 1995 to 2005. As is observed from the given information, the expenses on books increased in all the given four countries over time.

France and Italy spent about 50 million dollar in 19995 and both showed some fluctuations over the next years on their expenditure on books. After 10 years, French people spent about 65 million USD while Italian citizens expended just over 50 million USD. Finally, the expenditures in Austria for books was lowest among the given countries in 1995 but their spending increased very sharply and it reached to over 70 million USD which was more than double than their expenses in 19995.

In summary, German spent the maximum amount on books while Austrian people’s spending on books rose more quickly than any other given European countries.