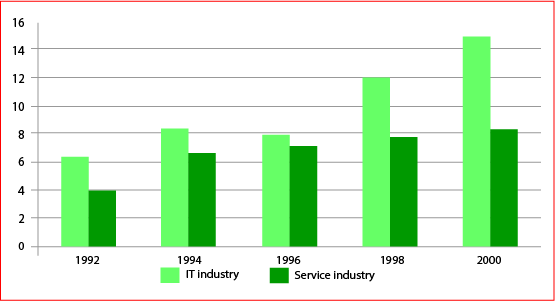 The given bar chart compares the IT and Service industry as part of the GDP in the United Kingdom over a nine years. Overall, IT contributed more to the UK GDP than the Service industry did.

According to the given bar graph initially in 1992, Information Technology contributed just over 6% of UK’s GDP while the service industry helped to gain 4% of UK’s GDP. Over the years the contribution of these two sectors towards the overall GDP in UK increased except for the year 1996 when IT contributed just below 8% on GDP compared to the last year’s just over 8%. In 1998, the GDP contribution by IT industry increased to 12% while the service industry’s contribution on GDP in this year was just below 8%. Finally in the year 2000, the IT industry made over 14% Gross Domestic Products compared to just over 8% of GDP component by Service industry.