The diagrams below illustrate changes affected in the district park between 2004 and 2014.

District park looked then years ago and how it looks now. 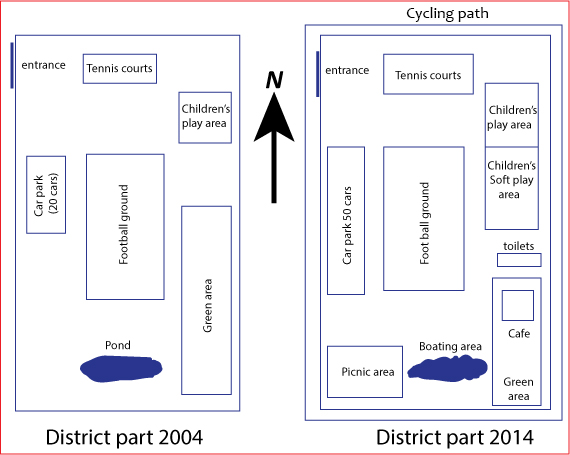 The given diagram compares the changes that took place in the district park between the years 2004 and 2014. As is observed from the given illustration, some new establishments and renovation were done to the district park.

As is clear from the given comparison map, entrance and tennis court at the northern part of the park remained intact as it was in 2004. Car parking area has been enhanced to accommodate more cars. Football ground remained at the centre of the park but the children’s soft play area was newly established adjacent to the children’s play area. A picnic spot was newly established at the south side of the part that was not present in 2004. Near the picnic area a boating area could also be observed in the latest map which was a pond in 2004. Green area of the park now has a cafe while toilets have also been built later on. Finally the out side road at the north side of the part was converted for cycling which was not present in earlier map of the district park.