The diagram below shows the average hours of unpaid work per week done by people in different categories. (Unpaid work refers to such activities as childcare in the home, housework and gardening).

Describe the information presented below, comparing results for men and women in the categories shown. Suggest reasons for what you see. 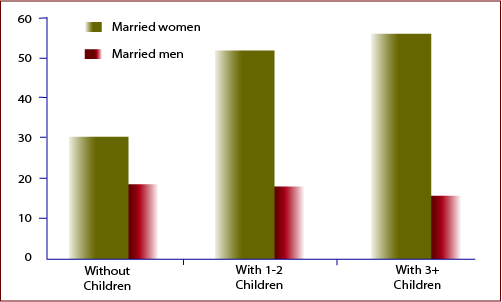 Sample Answer:
The supplied bar chart presents information on unpaid hours of household works done by married people who fall in one of the three categories namely without child, with one to two children and having more than 3 children. Overall, married women did more unpaid work than married men did and the working hours for married women were more with the increase of the number of children.

According to the bar graph, married women and men without any child worked for 30 and around 18 hours of pay-less jobs per week. This working hours for parents with one to two children increased to just over 50 hours for women and just below 18 hours for men in a week. Finally women with more than three children had to work longest hours of unpaid works which was over 55 hours in a week while this number for men was just about 17 hours per week. Interestingly, women with more children had to work more while men in all three categories worked for about 17-18 hours per week.