The charts below show the percentage of water used for different purposes in six areas of the world. 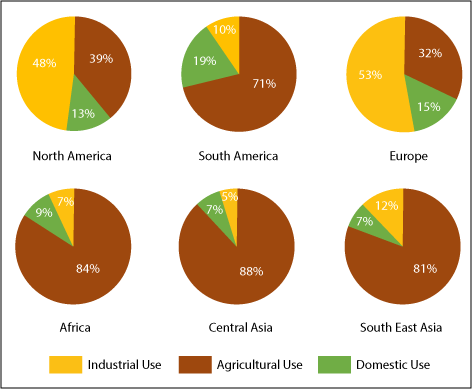 The given pie charts present information industrial, agricultural and domestic water usage in six different parts of the world. As is seen from the given illustration, water consumption for agricultural purpose is dominant in Asian, African and South American region whereas it is mainly used for industrial purpose in North America and Europe.

As the pie charts depict, more than 80% water is consumed for agriculture in Africa and Asian region. South American water consumption goes 71% for the same purpose. As those countries major percentages of water consumption are for agriculture, the percentages of water use in industries and houses are less than 20% in combination. Among those countries only South America uses 29% water for domestic and industrial purposes.

On the other hand, larger portion of water is used for industries in North America and Europe which are 48% and 53% respectively. They use less than 40% water for agriculture. Again the domestic water consumption is higher in America and Europe around 15% than that of Asian and African region.