The charts below give information about USA marriage and divorce rates between 1970 and 2000, and the marital status of adult Americans in two of the years. 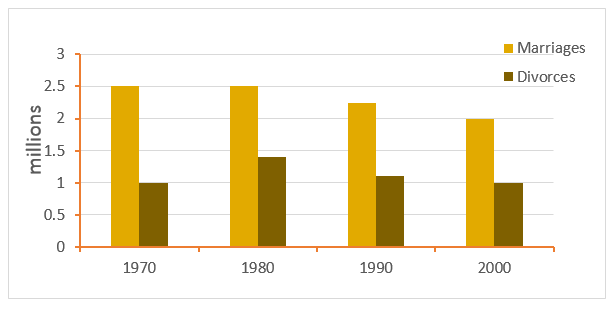 Sample Answer:
The bar graphs show the marriage and divorce figure in the USA from 1970 to 2000 and also compare the marital status of American adult citizens for two different years with a gap of 30 years.

According to the second bar graph, in 1970, about 15% adult Americans never got married while 70% were married and remaining 15% were either divorced or widowed. On the contrary to this, number of married American adults reduced by 11% in the year 2000 while the number of unmarried people and divorced people increased. The data clearly depicts that, the number of divorced and unmarried population in America was higher in 2000 than it was 30 years earlier.