The charts below show US spending patterns between 1966 and 1996. 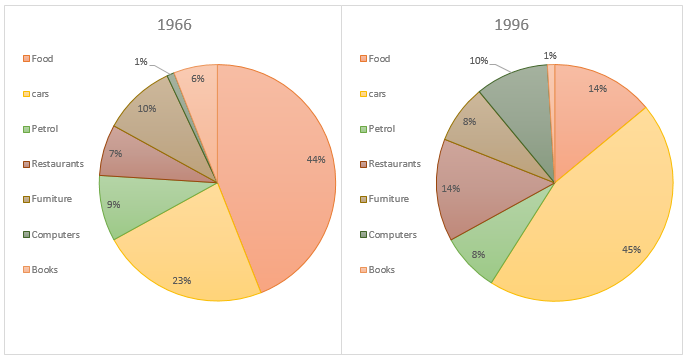 Sample Answer:
The supplied pie charts show the spending patterns of US residents in 1966 and 1996 and compare the spending in eight different sections. As is observed from the charts, expenses on cars increased significantly over time while a opposite trend is true for the food related expenses.

In 1966, US residents spent almost half of their total spending for foods. In this year they spent about one fourth of their total spending for cars. The spending patterns show that US people spent almost 10% for Petrol and furniture. They spent 7% on restaurants and only 1% on computers as computer devices must have been less available and less popular at that time.  Interestingly, their expenses on books were as much as they did for the restaurant bills.

After 30 year, in 1996 there were some significant changes on the spending patterns of the US citizens as it was in 1966. First of all, they spent significantly more (almost double) on cars while their expenses on foods reduced to 14% (almost one third) than they spent in 1966. The expenses on computer naturally increased to 10% and more expenses were made to the restaurants.  Interestingly they spent very less on purchasing books. Other expenses like furniture and petrol furniture remained almost same.