The graph below shows US consumers’ average annual expenditures on cell phone and residential phone services between 2001 and 2010. 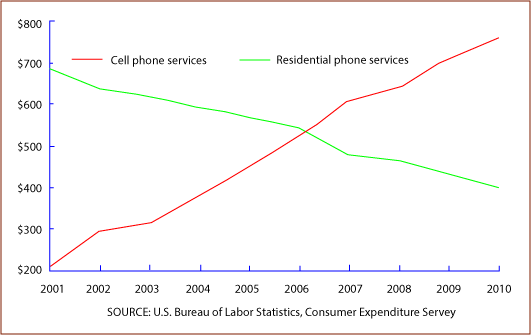 Sample Answer:
The supplied line graph compares the US citizens’ average yearly expenses for mobile and land phone services for a 10 years’ time. The annual expenses are given in the Y axis while the X axis presents the years from 2001 to 2010. The data is taken from a survey done by Bureau of Labor Statistics on consumer expenditure. Overall, the cell phone service expenditure increased significantly while the opposite is true for the residential phone.