The chart below gives information about the UK’s ageing population in 1985 and makes predictions for 2035.

Percentage of population aged 65 and over 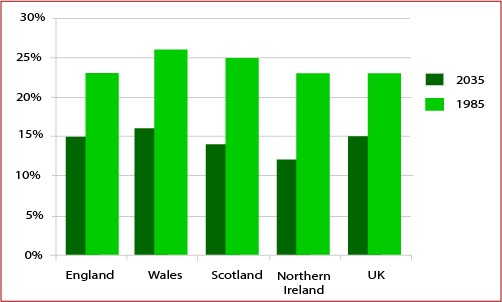 Sample Answer:
The given diagram presents data on percentage of old population who are 65 years or older in the United Kingdom for the year 1985 and also forecasts this proportion for the year 2035. While the Y axis presents the percentage of aged citizens in UK, the X axis shows the four countries and average of UK. Overall, old people’s proportion in the UK was 15% in 1985 and after 50 years this proportion will reach to over 20% while Wales has the largest proportion of old people among the four given parts of the UK.

According to the bar graph, UK had 15% senior citizens in 1985 and after 50 years it is forecasted that this proportion will reach over 20%. Among the four given parts of the UK, Wales had the largest proportion or old people (over 15%) in 1985 compared to the 15% in England, about 14% in Scotland and about 12% North Ireland. According to the given prediction, after 50 years, in the year 2035 the old population who are 65 years old or older than that would increase significantly. In Wales this percentage would be highest (above 25%) while it would be 25% in Scotland. In the remaining two places: England and Northern Ireland, the percentage of old people will be around 23%.