The line graph shows thefts per thousand vehicles in four European countries between 1990 and 1999. 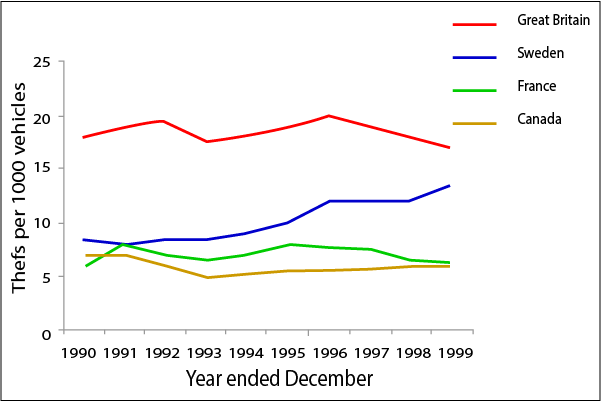 Sample Answer:
The illustration compares the number of vehicle theft in Great Britain, Sweden, France and Canada from 1990 to 1999. The Y axis of the bar graph shows the vehicles theft per 1000 while the X axis presents the years.

As is observed from the line graph, automobile stealing in Great Britain was higher than the other 3 countries. In 1990, the car stealing in GB (Great Britain) was about 18 per thousand while it was 5-10 in other three countries. The car theft in GB showed some fluctuations over the years and finally reached to about 16 per thousand. On the other hand, the vehicle stealing in Sweden was below 10 per thousand and over the years it increased gradually and reached to about 13/thousand in 1999. Car theft in France and Canada was about 6 per thousand in 1990 and over the years they showed some fluctuations and finally in 1999 remained almost same that of 10 years earlier.