The bar chart shows the percentage of unemployed graduates. 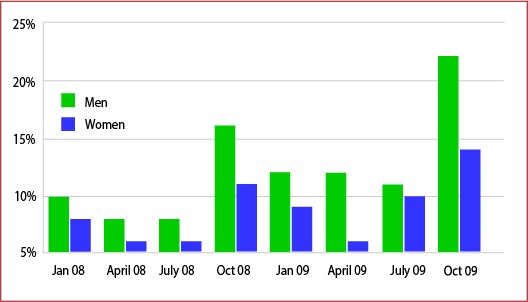 As is observed from the given bar graph, 10% men with graduation degree were unemployed in January 2008 compared to about 6% women unemployed with graduation. This rate decreased both for men and women in April and July but increased sharply in October 2008 when more than 15% male graduates were unemployed compared to that of just over 10% female. In the early 2009 the rate of unemployment rate for women decreased significantly but remained same as it was for men. In mid 2009, the unemployment among men and women reached to about 10% which shows a rapid increase in female unemployment. Finally in October 2009 the unemployment among graduate male and female reached to highest (over 22% for male and about 14% for female) than any other given time.