The graph below shows UK acid rain emissions, measured in millions of tonnes, from four different sectors between 1990 and 2007. 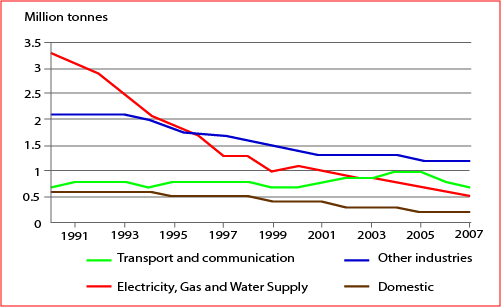 As is observed from the graph, more than 3 tonnes acid rain emission caused by a single sector (electricity, gas and water supply) in 1991. In this year other three sectors: transport & communication, domestic and other industries in combination released just over 3 million tonnes of acid rain among which more than 2 million was emitted from other industries. Over the years the acid rain release from electricity, gas and water supply decreased sharply and reached to just one ton in 1999. At that time other industries emitted the maximum amount of acid rain which was about 1.5 tonnes. Other two sources contributed to about 0.5 tone acid rain emission in this year. Domestic sectors always emitted the least amount of acid rain which was initially over 0.5 ton but got below 0.5 after the year 1998. Finally in the year 2007 overall acid rain emission from all these four sectors decreased and they were from approximately 0.25 to 1.25 tones out of which ‘domestic’ was lowest and ‘other industries’ was highest.