The graph below shows the fertility rate of women in six Gulf countries. 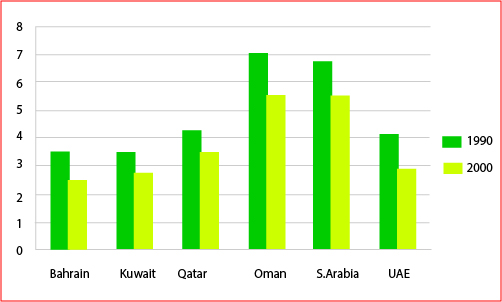 Sample Answer:
The given diagram gives information about the female fertility rate in six Gulf countries namely Bahrain, Kuwait, Qatar, Oman, Saudi Arabia and UAE from 1990 to 2000. Overall, the fertility rates among women in Oman and Saudi Arabia was higher than other four countries.

In summary, the child birth per woman in given Gulf countries decreased in 2000 than that of 10 years earlier and Omani and Saudi Arabian woman gave birth to more children than that of woman of other four given countries.