The graph below shows predictions about the number of people who will study three major world languages between 2020 and 2030. 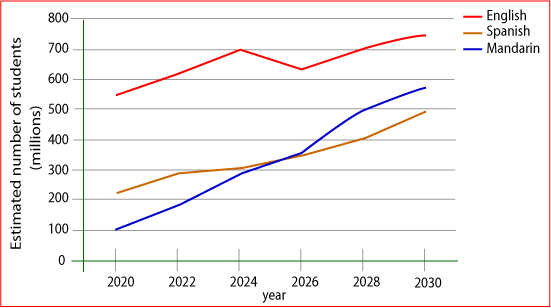 The given line graph gives forecast about student’s number in three major languages namely English, Spanish, Mandarin from 2020 to 2030. As is observed, more people would be inclined to learn English while Mandarin would gain its popularity among the language learners and would have more learners than the Spanish language.

According to the line graph, more than 550 million people will study English in 2020 while the number of learners for Spanish and Mandarin will be just over 200 and 100 million respectively in this year. The popularity of English study will keep increasing till 2024 when it will have 700 million students and after that it would drop. At that time the total number of Mandarin and Spanish language learners would be almost same (about 300 million). In around 2025 the number of Mandarin learners would intersect the number of Spanish learners and after that both of these language learners’ number would keep on increasing sharply. Compared to two other language learners English would have a slow increase though it will always remain at the top position in terms of learners’ number.