The diagrams show a structure that is used to generate electricity from wave power. 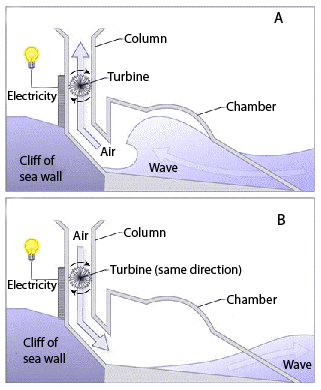 Sample Answer:
The given diagrams show how the electricity is generated from the sea wave power. As is observed from the given pictorials, both high tides and low tides are used for generating the electricity.

According to the given diagrams, the whole structure is placed near the cliff of sea wall. The structure for generating electricity from sea waves has turbine placed inside two columns. One part of the column is fixed with the cliff of sea wall while the other part is extended towards the sea. The chamber is a curved shaped extension of the column that helps to create the air pressure.