The chat below gives information about Southland’s main exports in 2000, 2015 and future projection of 2025. 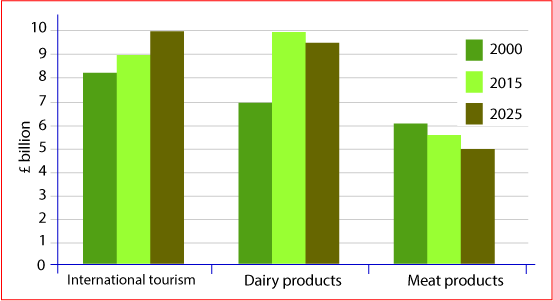 Sample Answer:
The given bar graph gives data on the main exports of Southland in 2000, 2015 and also forecasts for the year 2025. Overall, tourism was the main exports for Southland and it is projected that it would exceed the other two types of export sector in 2025.

It is projected that, international tourism would be the highest earning source from export sector in 2025 for Southland as it would bring about 10 billion compared to 9.5 billion from daily products and 5 billion from meat products.