The table below shows changes in the numbers of residents cycling to work in different areas of the UK between 2001 and 2011. 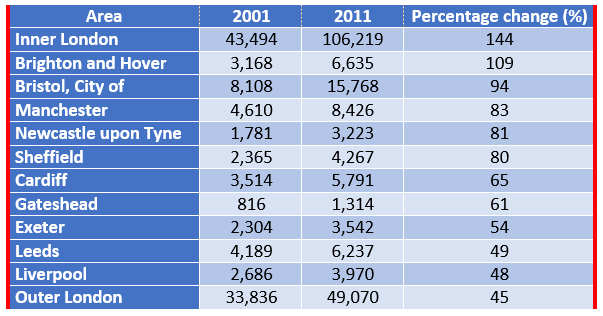 As is observed from the given table, Inner London had more than 43 thousand bicycle riders and that was largest among the given 12 areas of UK who used this means of transportation to reach their offices. Outer London comprised more than 33 thousand bicycle users to reach office which stood at the second position in this regards. Other areas including Liverpool, Leeds, Exeter, Cardiff, Sheffield, Newcastle upon Tyne, Manchester and Brighton and Hover had comparatively less such bicycle riders which were between two thousand to less than 5 thousand. The lowest number of bicycle users in this year could be found in Gateshead which was only 816.

After 10 years the bicycle users who reached their workplaces using it increased significantly. Inner London’s bicycle riders in 2011 reached to over 100 thousand which was 144% higher than that of 2001. Significant increase in such people could also be observed in Brighton and Hover (109% increase) Bristol, City of (94% increase). In other areas including Manchester, Newcastle upon Tyne, and Sheffield got more 80 percent or more increase in their bicycle users to reach office. In other areas the percentages of increase of such riders were from 45 to 65%.