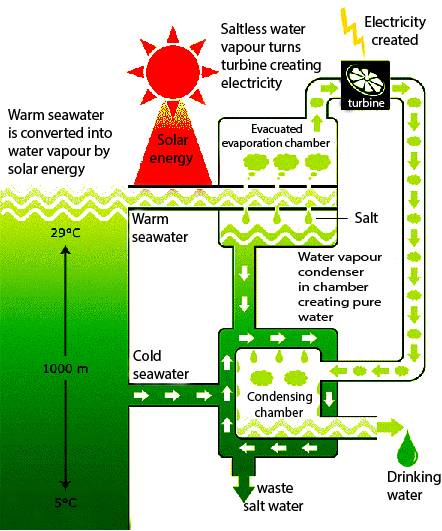 According to the diagram, sunlight heats up the sea water and the warm water then turns in to vapour at around 29 degree Celsius. The evacuated evaporation chamber is places near the sea water so that the water that turns into vapour from solar energy can pass through a turbine. Sea water which is evaporated is saltless and passes through the turbine and that creates the electricity. During evaporation, the salty water is stored in a lower portion of the ‘evaporated evaporation chamber’ and from there it is passed through a rectangular condensing chamber that filters the pure drinking water from waster salt water. The whole OTE structure is placed inside the sea water of 100 meter and the water evaporation occurs in 29 degree Celsius temperature while the water purification is done using deeper and cooler sea water which is usually 5 degree Celsius.