The graph below compares figures for the production and consumption of energy in the US from 1950 to 2000. It also predicts figures for 2025. 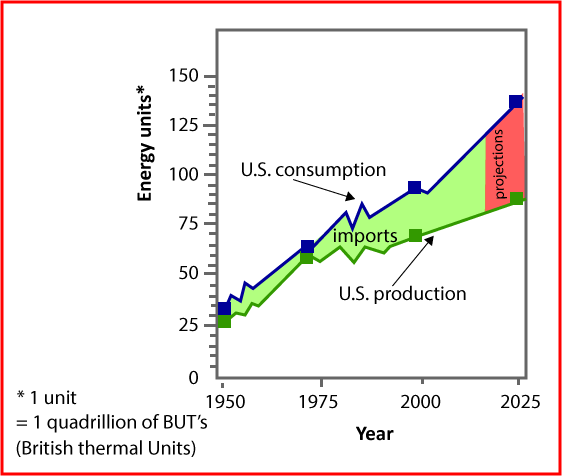 The figure reveals information about the energy produced and consumed by Americans from 1950 to 50 years later, with projections until 2025. In general, it is clear that the used and made electrical power increased gradually over the period of four different years. In addition, the utilization of energy is expected to see the most dramatic rise as opposed to the production of energy in 2025.

In 1950, US consumption of electricity started at over 25 thermal units which were more than double after 25 years. There were gradual fluctuations seen between 1975 and 2000 but nearly 100 units were consumed in the latter year. A sharp increase was predicted in 2025 with more than 125 thermal units to be consumed.

The energy produced by the USA also showed a rise throughout the years. Roughly 25 units were produced in 1950 which was also doubled in 1975. There were little changes after 25 years but around75 thermal units were predicted to be produced in 2025.