The charts below show the most popular films by genre for men and women and general ticket sales for different types of film in the USA in 2010. 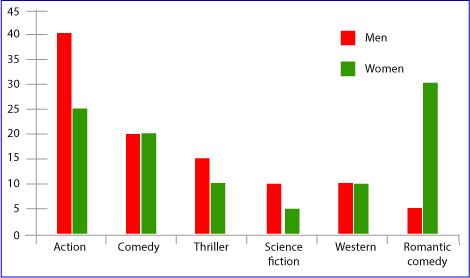 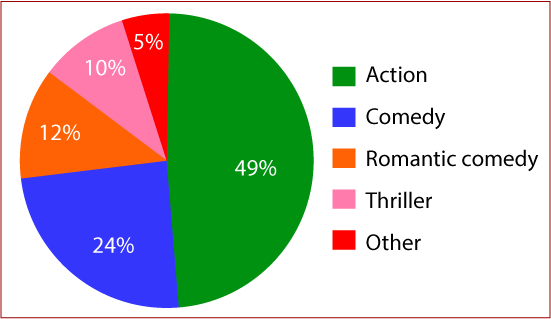 The given diagrams present information about the popular films genres among men and women and also show the ratio of ticket sales for different film types in the USA in 2010. As is seen in the given illustrations, action movies had far more popularity both among men and women and the ratio of ticket sales for this type of movie was also far higher than any other film category.

According to the bar graph, 40% men preferred actions movies while 25% women preferred this genre of movies. Romantic comedies were most popular among women with about 30% preferences while it was preferred by very few percentages of men (only about 5%). Comedy movies stood in the second position in terms of their popularity among men and women and 20% men and women preferred this movie category. Thriller and Science fiction movies were more popular among male film viewers while western movies had almost equal popularity among males and females. Science fiction and Western movies had less popularity among viewers compared to action, comedy and thriller movie genres.

The popularity of movies had a direct relation with the box-office taking in the USA.