You should spend about 40 minutes on this task.
Present a written argument or case to an educated reader with no specialist knowledge of the following topic.

Popular events like the football World Cup and other international sporting occasions are essential in easing international tensions and releasing patriotic emotions in a safe way.

To what extent do you agree or disagree with this opinion?

You should use your own ideas, knowledge and experience and support your arguments with examples and relevant evidence.

You should write at least 250 words. 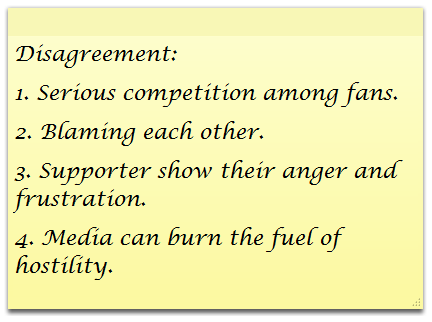 After every four years, the world experiences several international sporting events like the FIFA World Cup or Olympics in which different nations participate to show their best performance. Some people argue that these events play an important role in pacifying the international stresses and evoking patriotic feelings among the individuals, while others believe that those events actually fuel the further disputes. From my way of thinking, these events cause vulgar nationalism that worsens international harmony.

Popular international sports events, like FIFA World Cup or Olympics, exhilarate intense patriotic emotion and people, very often, are maddened with the intense emotion. As a result, the playground may turn into a battlefield and the international relationship among the nations gets worse rather than better. On the top of that, the media of the respective nations wage a campaign of deep hatred. Consequently, these events, in fact, fuel vulgar nationalism and people may become angry to the point of erupting into violence. A very good example here is a World Cup qualifying match in 1969. The match between El Salvador and Honduras caused a terrible war that took hundreds of lives, thousands of people were wounded and maimed, and hundreds of thousands of people were made homeless. Thus, these popular may turn into bitter experience ruining international relationship.

Besides, patriotism, in common parlance, is the love for the country. International sport festivals can be a tool for sticking the people of the same nation altogether but for the time being. The abrupt feelings are faded away soon after the finishing of the match. As far as I believe that a true emotion for the country lies in the awareness of the people. The people of the country should be constituted as a political community, only then, there may exist a sustainable emotions for the country. And the international sports festivals can only entice vulgar nationalism rather than patriotism.

All things considered, it seems reasonable to assume that international sports competitions are unable to calm international tension. In reality, these occasions bring forth vulgar nationalism, which in turn leads to conflict, even armed strife among nations.