The diagrams below contain information regarding percentages of people occupied in various types of positions in 1999 and 2001.

Write a report for a university tutor describing the information shown.

Employment percentages of various positions in 1999 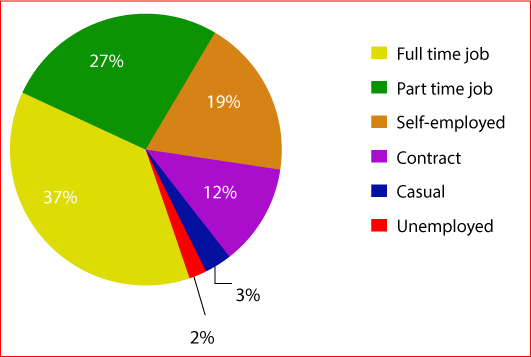 Employment percentages of various positions in 2001

The given diagrams compare the ratio of job holders in different categories in 1999 with that of 2001. As is obvious in the given illustration, full time job holders were the largest portion of these groups and the percentage of unemployed people increased in the given period.

According to the first pie chart 37% people were full time employed in 1999 while the part-time employees’ were 27%. The percentage of self-employed people was 19 while 12% did the contract based jobs. Only 2% of the people were unemployed while 3% were engaged in casual jobs.

On the contrary, the percentage of full-time job holders decreased in 2001 and dropped to 29%. This was an eight percent drop and most significant among the given figure. Unemployment ratio increased by 4% and reached to 7% in 2001 compared to only 2% unemployment in 1999. Again, the part time job holders’ ration dropped to 23% in this year and there was no noticeable change between the ration of self-employed people in these two years. Contact based jobs had more employees in 2001 than that of 1999 and no changes could be observed in case of the ratio of casual job holders.