The bar chart below gives information about the percentage of the population living in urban areas in the world and in different continents.

Percentage of population in urban areas 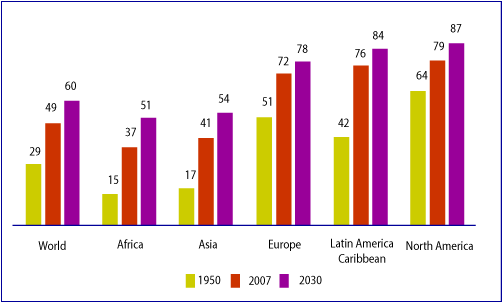 Sample Answer:
The given illustration presents data about the urban area population in the world and also their distributions in 5 continents. The data was taken from the World population data sheet.

As is given is the bar graph, 29% world population lived in urban areas throughout the world. Among the five continents the distributions of population in urban areas were 15, 17, 51, 42 and 64 percents respectively. Urban population percentage in North America was highest among the given continents which was 64% in this year while it was lowest in Africa with 15%.