The charts illustrate how recycling is carried out in Eutopia, and the pie charts show the percentage of recycled and unrecycled waste. 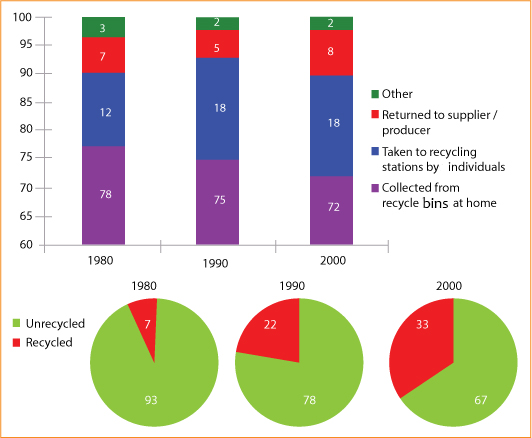 As is presented in the bar graph, 78% wastage were collected from home recycle bins in 1980. In this year 12% garbage were taken to recycling stations by individuals. The remaining 10% wastage recycling were carried out by returning them to the manufacturer and in other ways. After 10 years the recycling process in Eutopia remained almost same except that more people took the wastage for recycling to the stations which was 18% of total recycling. This increased recycling steps taken by individuals slightly decreased the other ways of recycling. Finally in 2000, the waste collection from home garbage trashes decreased to 72% and returning to manufacturers or suppliers increased to 8%. Individuals’ contributions to recycling remained same as it was 10 year ago.

The pie chart shows that the recycling percentage of wastage increased significantly over the year. Only 7% recycling was done in 1980 when remaining 93% wastages were unrecycled.  This recycling increased to 22% in 1990 and 33% in 2000.