The graphs below show the numbers of male and female workers in 1975 and 1995 in several employment sectors of the republic of Freedonia.

Write a report for a university teacher describing the information shown.

Employment in Freedonia by sex in 6 sectors, 1975 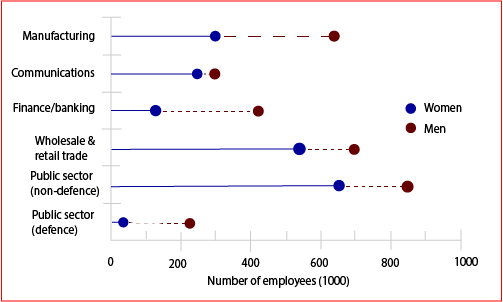 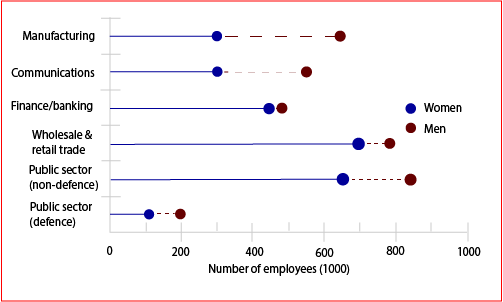 As is observed in the graph, initially in 1975 men had far better employment conditions than that of female in Freedonia. In manufacturing sector there were about 700 men out of 1000 compared to only about 300 female per thousand. In ‘wholesale & retain trade’ and ‘public sector (defence) there were more male employees (about 700-900) compared to around 500-700 female. Similarly in Finance and banking sector male were prominent. Only sector where the gap between male and female employees was less was in communication sector where around 300 male and 200 female were working.

After 20 years, the scenario of employment sectors in Freedonia changes significantly. The female employment specially improved a lot and the gap started to decrease. Women were almost equal in number in Finance & banking and wholesale and retail trade. Overall number of job holders in these six sectors increased but male were still predominant in manufacturing and communications sector.