The graph below compares the number of visits to two new music sites on the web. 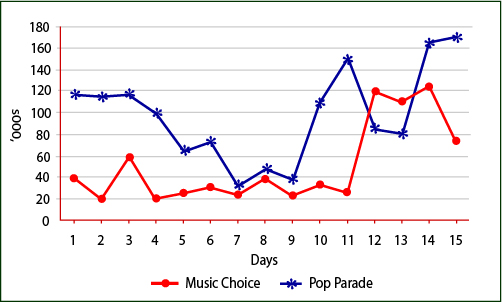 Sample Answer:
The illustrations compares the visit to two new music websites for fifteen days measuring them in thousands. Overall, the surfer of Pop Parade website got higher visitors than that of Music Choice but the later one received more visitors on 12th and 13th days.

On the other hand, Music Choice received their highest listeners on day 14 (over 120 thousand visitors) and their lowest visitor count was on day 2nd and 4th (only twenty thousand). On day 7, and 8 the visitors of these two websites were almost same and these numbers were 20 and 40 thousand respectively. The Music choice received higher music surfer than Pop Parade on days 12and 13 while in all other days the later one received more visitors.