The chart below shows the total number of Olympic medals won by twelve different countries. 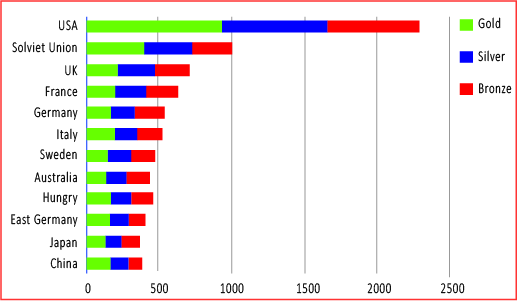 According to the bar graph, the USA alone won far more medals than any other countries. The USA alone won about 900 gold medals, 700 silver medal and 500 bronze medals. No other country won so many medals in any type i.e. gold, silver and bronze that the USA did. Soviet Union was the second most medal winning country in Olympic game with about 400 gold, 300 silver and 200 bronze medals. United Kingdom was the third most medal winning country with over 700 total medals of which about 200 was gold. Other European countries like France, Germany and Italy each won more than 500 medals. Sweden, Australia, Hungary, and East Germany won around 100-200 gold medals, about 100 silver medals and few other bronze medals. Japan and China were two Asian countries to won the medal in Olympic game and they each won about 300-400 medals in total. China won more medals than Japan did but they were far behind than the USA, UK and other countries that won Olympic medals.