The map below is of the town of Canterbury. A new school (S) is planned for the area. The map shows two possible sites for the school. 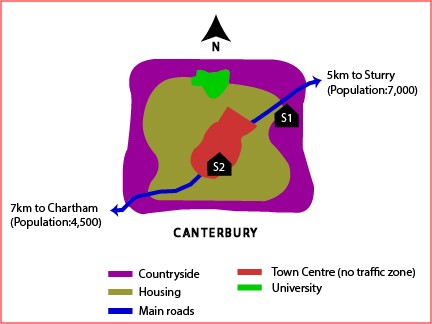 Sample Answer:
The provided illustration shows the map of Canterbury and denotes two possible sites for the establishment of a new school. As is observed from the map, there are two proposed location for the school, i.e. S1 and S2.

According to the map given, the Canterbury city is surrounded by the countryside which formed the town to be square shaped. Main road has intersected the town diagonally and crossed the South-Eastern to South-Western part of the town. The housing area conforms most of the part of the town and the Town centre is in the middle of this town and this town centre is no traffic zone. There is a university in the northern part of the city and it is denoted with the green marking in the map. Two proposed locations for school are S1 and S2. While S1 is near the Northern corner of the town and it is 5 km. away from the ‘Sturry’ which has about 7 thousand population. Other proposed location is S2 and this is inside the town centre and is 7 km. away from the ‘Chartham’ city which supports a population of four thousand and five hundred.