The charts below show information about the number of kilometres travelled in an average month and the distribution of vehicle types in Britain. 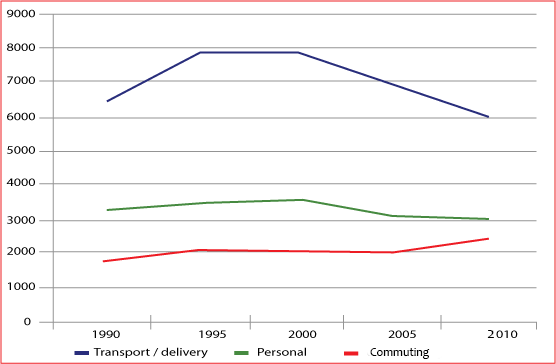 The given illustration presents information about the average distance travelled per month by the British citizens as well as the types of vehicles they used to travel this distance. As is observed from the graph, car was the most preferred vehicle in Britain and delivery transportation, personal and commuting were the three major reason s for travelling.

Car was the most preferred vehicle to travel in Britain which contributed to 63% of total travel in 1990 and 59% in 2010. Truck was second most preferred vehicle type that was used around one fourth of total distance travelled. The use of buses, motorcycles and others vehicle types remained less popular and were used for about 2 to 6 percentage of total travel both in the 1990 and 2010.