Some experts believe that it is better for children to begin learning a foreign language at primary school rather than secondary school.

Do the advantages of this outweigh the disadvantages?

In agreement with the given statement: 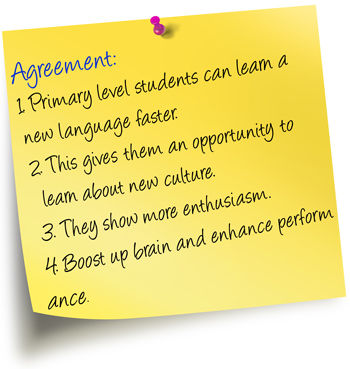 In disagreement with the given statement: 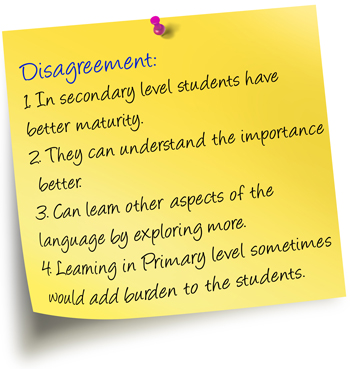 Babies, toddlers and preschoolers are being enrolled in the foreign language classes by a growing number of parents and the numbers are expected to rise. That means parents now want to be more proactive in jump-starting second language education for their children. At this point, many educators and linguists contend that children will be more beneficial from second language acquisition in elementary school rather than the high school level. As far as I believe that the earlier a child is introduced to a second language, the greater the chances are that the child will become truly proficient in the language. One thing should be mentioned here that speaking a foreign language boosts cognitive, memory and listening skills.

Linguists suggest that kids should start to learn a second language from an early stage; the earlier, the better. Every child is born with the ability to acquire any language in the world. That is to say that language acquisition is an innate capacity of human being. Caryn Antonini, the creator of Early Lingo (earlylingo.com), expounds that “the older the child gets, certain windows close in terms of language acquisition, but so long as the child learns the language before puberty [fusion_builder_container hundred_percent=”yes” overflow=”visible”][fusion_builder_row][fusion_builder_column type=”1_1″ background_position=”left top” background_color=”” border_size=”” border_color=”” border_style=”solid” spacing=”yes” background_image=”” background_repeat=”no-repeat” padding=”” margin_top=”0px” margin_bottom=”0px” class=”” id=”” animation_type=”” animation_speed=”0.3″ animation_direction=”left” hide_on_mobile=”no” center_content=”no” min_height=”none”][age 12 or 13], the child should be able to speak with a native accent”.

Again, there are many cognitive benefits of learning a foreign language at an early age. Children who learn a second language at an early age show higher performance in overall basic skills in primary school. They also exhibit better problem-solving skills, enhanced spatial relations, and heightened creativity. According to College Entrance Examination Board, candidates who learn a second language score higher on SATs. So, learning a foreign language early on boosts flexible thinking and communication skills, helping children consider issues from more than one perspective.

People Generally Know That The Environment Is Important

The Unlimited Use of Cars May Cause Many Problems

Measures that government can take to discourage people from using cars?