The line graph below gives information on cinema attendance in the UK.

Cinema attendance in the UK 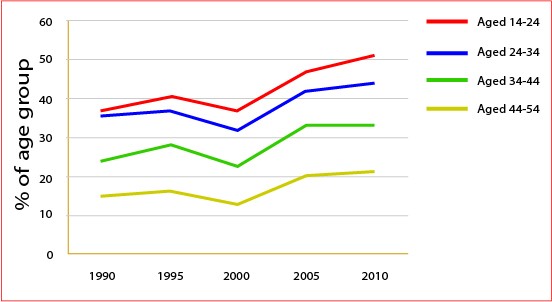 Sample Answer:
The supplied diagram presents data on cinema goers in the United Kingdom based on age groups. As is observed from the line graph, young people tended to visit cinema more than people of other age groups.

According to the given line diagram, young people who are between 14 to 24 years old went cinema halls more than people from other age groups. Initially in 1990, 37% cinema attendants were 14 to 24 years old while this number got decreased with the older age groups. People who fell between 44 to 54 years old contributed to only 15% of the total cinema viewing. In the year 2000, the cinema attendants’ number reduced for age groups and increased significantly in 2005. Finally in 2010 the percentage of 14-24 year’s old movie goers were above 50% while this number for 24- 34 years, 34-44 years and 44 -54 years were consecutively 44%, 32% and 21%.