Increasing the price of petrol is the best way to solve growing traffic and pollution problems.

To what extent do you agree or disagree with the above statement? What other measures do you think might be effective?

Model Answer :
Traffic and pollution are the most pressing issue of city life. Each day, the problem is going from bad to worse with the growing number of private vehicles. That is why, some people contend that the price of fuels should be soared. From my point of view, I do not think it is a sensible idea as it may bring forth devastating consequence in economy. I would rather want government to encourage people to use public transports instead of using private cars.

To commence with, traffic and pollution issues are getting worse and worse. In many circles, it is argued that government should hike the price of fuels up in order to grapple with the issue. They claim that when the price shoots up, people will tend to lessen their use of private vehicles, which in turn will curb the issue. But, the increase in fuels may impact on economy severely. If the price of fuels soars, it will eventually affect each and everything that we use or consume in our daily life. That is to say, the increase in fuel price will raise the transport cost, the rise in transport cost will increase in the price of commodities, which in turn will cause inflation. The increase in fuel price, thus, has dire consequences.

In my opinion, the government should spur people to use public transports rather than increase in fuel price. This is because, it will decrease private cars on the roads, and at the same time the economy will come to no harm. As a result, it will curb the traffic congestion and environmental damages as well.  Apart from that, the government also should try to raise awareness of disastrous consequences of the increasing number of private vehicles so that people are encouraged to change their driving habit.

To reiterate, the increasing traffic and pollution issues are a matter of considerable concern. Some people opine that the price of fuels should be rocketed up, while it could be argued that a price rise may actually increase the risk of damaging economy. It would be good if the government encourages people to use public transport as much as possible. 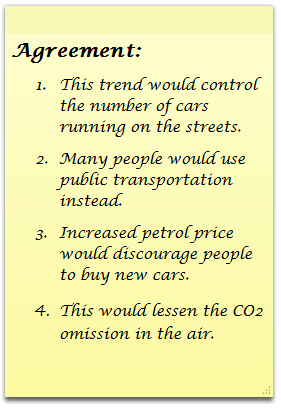 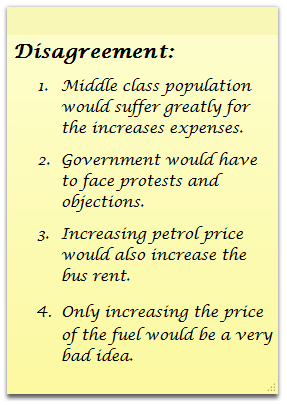 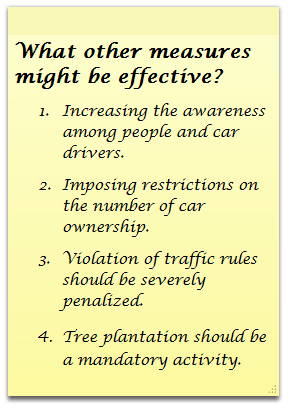