In some countries the average weight of people is increasing and their level of health and fitness is decreasing.

What do you think are the causes of these problems and what measures could be taken to solve them?

You should write at least 250 words.

What causes the increased weight of people in many countries? 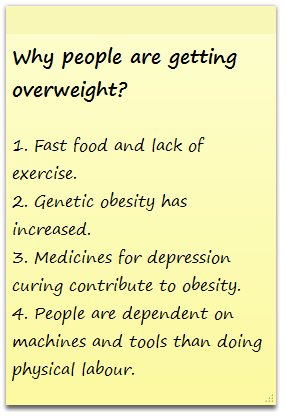 Measures that could be taken to tackle the overweight issue: 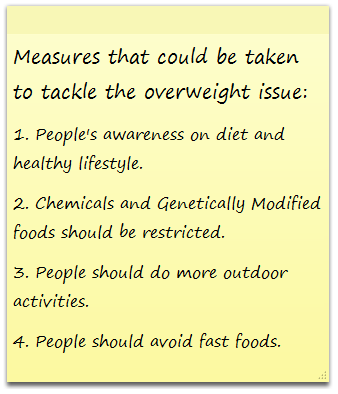 Model Answer :
Almost a third of the world is now fat, and no country has been able to curb obesity, according to new global analysis. In this essay, I am going to unveil some contributing factors result in this problem as well as corresponding remedies which could be taken to cure this issue.

Many studies have shown that lack of access to quality food contributes to obesity. Take America as an example is here. Two-third of U.S. adults is now overweight and one-third are obese, making normal-sized people actual minority. People, in poor neighborhood of America, are confined to unhealthy food environment. Residents of these areas are surrounded by junk food heavens like McDonald, KFC, Subway, and so forth. People have no option but eat rich food. Almost every American is struggling every day navigating the food system in which everything seems to make them overweight and obese.

Now, in order to grapple with the obesity issue, government and individuals should take some measures. The government ought to subsidise fruits and vegetables and should impose tax on junk foods so that people can afford healthy foods and are discouraged to eat unhealthy foods. In addition, the tax money should be spent on raising the awareness of the hazardous effects of junk foods. Likewise, individuals should change their food habit. They ought to cook and grill more frequently at home with healthy food items. For example, many studies show that people are less likely obese with home-made meals than those who eat junk foods of restaurants. So, changing the current food habit will curb the obesity and ameliorate the level of health and fitness.

All in all, I want to say that if we do not consider this as really serious urgent national priority, we are all of us individually and as nation going to pay really serious price. What type of nation can live without a workforce that is healthy? So, what the obese or the obesity is doing to the nation is crippling the workforce, beyond that crippling the families, crippling the individual, and the community. Therefore, the government and individuals should make efforts in tandem so that obesity could be conquered entirely.