The graph shows the impact of vaccinations on the incidence of whooping cough, a childhood illness, between 1940 and 1990 in Britain. 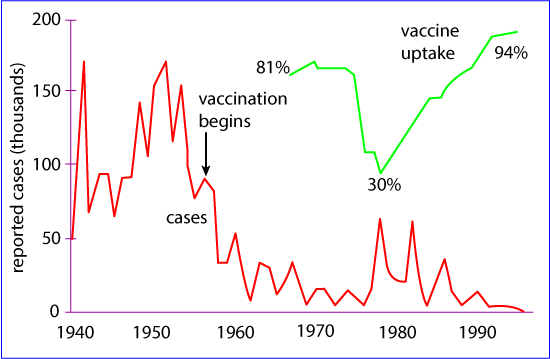 The supplied diagram presents information about the impact of vaccinations of whooping cough among British children from 1940 to 1990. As is seen from the given illustration, reported cases of whooping cough among children were higher in the early periods while the vaccine uptake increased significantly after 1985. It is evident from the graph that percentage of vaccination uptake had a direct relationship with the outbreak of this disease among children in Britain.

According to the given illustration, 50 thousand cases of whooping cough were reported in 1940 and this number kept on increasing with some fluctuations till 1952. The vaccination of this illness begins only after 1957 when more than 75 thousand cases of this disease were reported. The vaccination managed to reduce the reported whooping cough disease among the British children and it reduced to less than 10 thousand during 1960 to 1975. During this period the vaccine uptake was more than 80%. Interestingly the vaccine uptake declined to only 30% after 1975 and the reported affected children during this period increased to over 50 thousand with few fluctuations. The vaccination uptake percentage had a direct relation with the affected children and in 1990 the reported whooping cough children in Britain reduced to less than few thousands since the vaccine uptake during this time was more than 90%.