The graph below shows the hours spent in different study methods during a two year course. 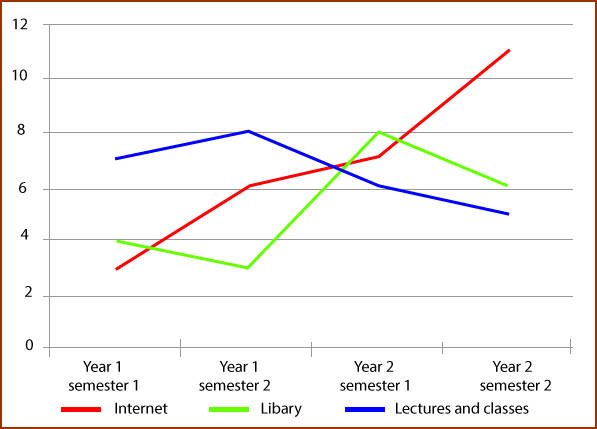 The given diagram compares the time spent by students in a two-year course in 3 different study modes: using internet, visiting library and attending lectures and classes. This two-year course had four semesters and second year students spent most of their study times using internet while the students spent maximum time attending lectures and classes in their first year.

As is presented in the given illustration, first year students during their first semester attended around 7 hours’ classes and lectures while they spent only about 2.5 hours using internet. They spent 4 hours in library while was higher than the time spent using Internet by them. However at the end of the semester they started spending more time for Internet browsing than visiting libraries. In the second semester of first year, the students spent just over 8 hours in their classes and that was higher than the time they spent using Internet and going to library. The Internet usage increased in this semester and the time spent on internet (about 6 hours) exceeded the time spent in library (about 2.5 hours). When those students were in first semester in second year, they used their study time in library mostly (around 8 hours) compared to   their time spent for Internet browsing (about 6.5 hours) and attending lectures and classes ( around 6 hours). During the end of the course, they spent significantly more time for browsing Internet and less time in classes and lectures.