The bar chart below shows the results of a survey conducted by a personnel department at a major company. The survey was carried out on two groups of workers: those aged from 18-30 and those aged 45-60, and shows factors affecting their work performance. 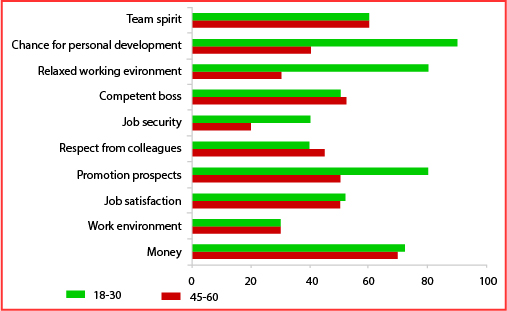 Sample Answer:
The bar graph compares the factors that affect the work performance of employees. The data was taken from a survey of a large company. The survey was done among the people of 18-30 & 45-60 age groups.

As is presented in the graph, workers who were in 18-30 age group emphasized personal development, relaxed working environment, aspects of career growth and money as the main factors that motivates their work performance. All of these aspects were emphasized by 75-90% of young workers. Other important aspects that were mentioned by the young workers included team spirit, competent boss, relation with colleagues, work environment and job satisfaction. Interestingly, money got more importance than job satisfaction and work environment.