The graph show information of employment rates across 6 countries in 1995 and 2005.

Summarize the information by choosing and describe the main idea, and make comparisons where appropriate. 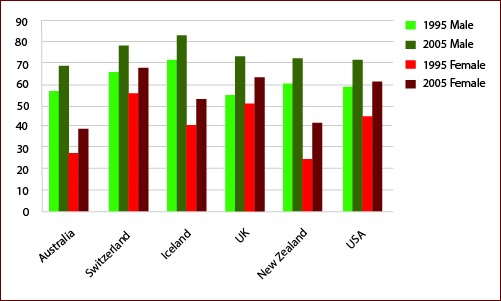 Sample Answer:
The supplied bar graph provides information about the employment in six different countries both for male and female for a ten years period commencing from 1995. As it can be observed from the bar graph, employment rate both among men and women increased in 2005 than that of 1995.

In case of Iceland, the working males in 1995 were just above 70% while female comprised 40%. These percentages of employment increased both for male (more than 80%) and female (more than 50%). In the given period, Iceland had the best employment ratio for men but not for the women. The United Kingdom and the United States had almost similar patterns in terms of employment while female in New Zealand had slightly less employment opportunity compared to the former two countries. About 60% men were employed in these three countries in 1995 which increased to around 70% in 2005. In case of women employment UK had slightly better condition than the USA and New Zealand.