Being a celebrity – such as a famous film star or sports personality- brings problems as well as benefits. Do you think that being a celebrity brings more benefits or more problems? 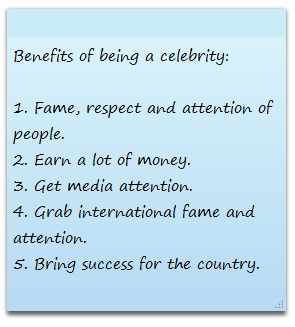 Disadvantages of being celebrity:

Almost every one of us dreams about being renowned and popular, like a famous superstar or sports figure. The general apprehension is that they have all a man should have in life. When they are on the red carpet they look like they do not have difficulties and their lives seem to fit perfect. It appears that the grass is always greener on the other side of the fence. Everything has its price. The truth is that there are as many drawbacks or downsides of being a luminary as there are the number of advantages.

First of all, celebrities are comparatively affluent than the average Joe. A celebrity can earn a lot of money, which itself is a great boon. They can afford luxurious homes and cars, fancy gifts and gorgeous cloths, some feel fortunate enough to share their wealth with the less fortunate. A good example here is Madonna, the American pop icon. She founded Raising Malawi, a non-profit organization that supports community-based organizations that provide vulnerable children and caregivers with nutritious food, proper clothing, and formal education and so on. Secondly, many opportunities arise when a person becomes famous. Whatever they do in the film industry they get a bunch of opportunities, like an ambassador or spokesperson for brands. Take people like Genesis Rodriguez made her red carpet debut as a new ambassador for L’Oreal Paris USA at the recent 15th Annual Latin Grammy Awards in Las Vegas. In addition, many celebrities are becoming business tycoon after and while they have stardom. And last but not least, very often celebrities belong a position about which a lay man can never think of. Just think of Angelina Jolie, she has achieved a fame which an ordinary woman can never touch the boundary. Though, both belong to the same gender, the acceptance makes an obvious difference.

On the flip side, the celebrities have no privacy in the most cases. If Demi Moor and her beau go for a long drive, the whole world will about it. Lack of privacy is one of the biggest handicaps of being a celebrity. Similarly, they are being judged constantly on their personality, habit and a lot more. Reading rude, insulting, derogatory, nasty and lies about one’s own self is a part and parcel of a famous film star’s daily routine. Imagine how embarrassing it would be if a tabloid published your hidden affair. Furthermore, a famous person cannot do things that an ordinary person can easily. They live in their secluded world. Even they cannot go for shopping to the super market, take a walk, chilling with friends at the park or having dinner with family at the local restaurant.

In brief, being famous has both bad and good sides. Despite of negative sides, I firmly believe that fame and fortune are the matchless factors in the life of a celebrity. Being a celebrity is endowed with more advantages compared to its difficulties.

Plastic Bags, Bottles and Packaging are Bad for the Environment

People Generally Know That The Environment Is Important

The Unlimited Use of Cars May Cause Many Problems