The chart below shows the different levels of post-school qualifications in Australia and the proportion of men and women who held them in 1999.

Post-school qualifications in Australia according to gender 1999 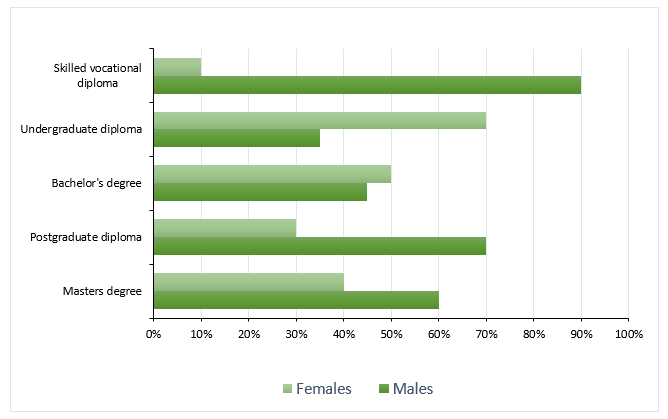 Sample Answer:
The given chart gives data on the post school qualification holding men and female in Australia for the year 1999. As is observed from the given data, female Australians were outnumbered by male in postgraduate degree and skilled vocational diploma.

According to the graph, out of hundred skilled vocational diploma holders in Australia, 90 were men and rests of the 10 were female. Female undergraduate diploma holders were almost double than the male undergraduate degree holders and the number for female with bachelor degree holders were more than male bachelor degree holders in this year. This was possibly because many female did not continue their postgraduate and Master’s degree while most men did. As a consequence, in case of post-graduation and Master’s level education, men outnumbered the female.

In case of post graduate diploma degree, men were 70 out of hundred compared to the 30 female. This information shows that Australian men were more interested in perusing postgraduate diploma than female did. Finally the gap between female and male Master’s degree holder reduced and their ratio was 6 by 4 in this year.