The diagram below shows the consumption of three different food items in Someland from 1970 to 1990.

Write a report for a university lecturer describing the information in the graph. 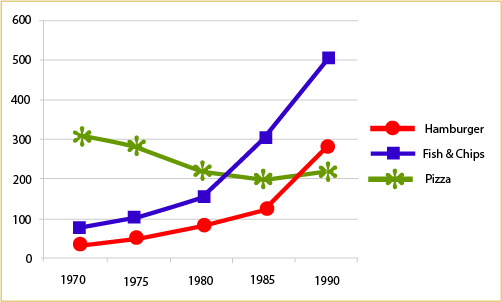 * Gram consumed by each person in a week.

Sample Answer 1:
The line graph compares the different three food items (namely Hamburger, Pizza and Fish & Chips) eaten by people of Someland between 1970 and 1990. As is observed from the graph, Fish & Chips became the most consumed food items over time.

The presented line graph illustrates amount of fast food intake in Someland over a period of 20 years.

The trend for pizza indicates decreasing trend, with highest amount consumption were in 1970 with individual eating up to 300 grams of pizza weekly. However, the rate gradually dropped up until 1985 to 200 grams weekly. However, in 1990 the line starting to go up slowly to just above 200 grams.

Unlike pizza, both fish and chips and hamburger were not consumed more than 100 grams per week in 1970, nevertheless the individual eating pattern for these two items increased drastically starting from 1980. Within the 10 years period fish and chip rise from 150 grams in 1980 to 500 gram in 1990, that is about 350 grams increase. Similarly, hamburger intake begins to go up steeply in 1985 from about 100 grams to approximately 300 grams in 1990.

Overall, Someland people prefers fish and chip, as compared to the other two food item.