The graph below gives information from a 2008 report about consumption of energy in the USA since 1980 with projections until 2030. 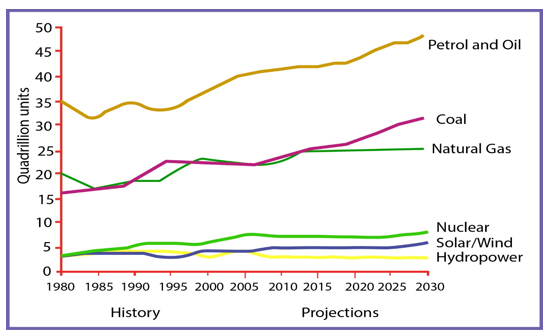 Sample Answer:
The given line graph demonstrates the consumption of different forms of energy in the USA commencing from the year 1980 and also gives forecast of this consumption till 2030. As is observed from the given illustration, petrol and oil consumption in the USA is highest among the given energy sources.

Over time the consumption of all these fuels increased and in 2015 petrol and remains the most consumed energy source. The use of coal and natural gas intersected in earlier 2014 and the trends show that coal would be used more than natural gas in the USA in the future.