The table below shows the consumer durables (telephone, refrigerator, etc.) owned in Britain from 1972 to 1983. 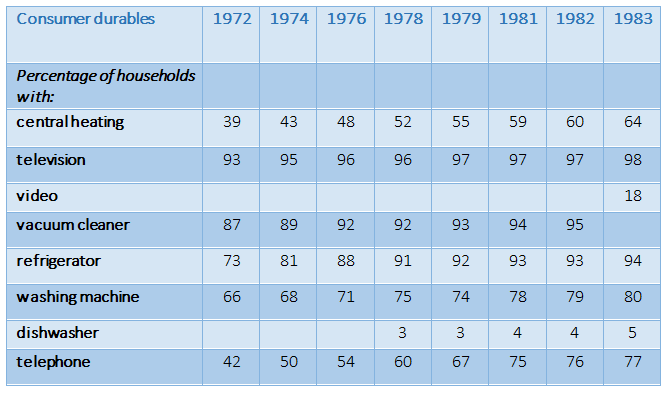 Sample Answer:
The given table shows data on the consumer durables like refrigerators, telephones dishwasher, vacuum cleaner etc. possessed by the British people from the year 1972 to 1983. As is presented in the table data, televisions, vacuum cleaners and refrigerators were the most common electronic products owned by the British people and more people owned those consumer products over time.

According to the given data, early in 1972, only 39% people owned central heating system while 93% people owned television. The ownership for other consumer products like vacuum cleaner, refrigerators were 87% and 73% consecutively. No data was given for video and dishwasher which were probably introduced later. In this year less than 50% people owned telephone though this percentage increased over time.

Almost all of those products’ ownership and usage increased year by year and in 1983, 64% people owned central heating system and the ownership of TV reached to 98%. 18 people out of hundred started using the video and only 5% people owned dishwasher and this is probably because of the price of this durable. The use of telephone increased over time and it reached to 77% in 1983.

As in a whole, the usages of most of the common consumer products in Britain increased over time and TV and refrigerators seemed to be the most common products for British citizen.
( Total Words = 223)