The chart shows the computer and internet per 1000 users in Arab world.

Computers and Internet in the Arab World 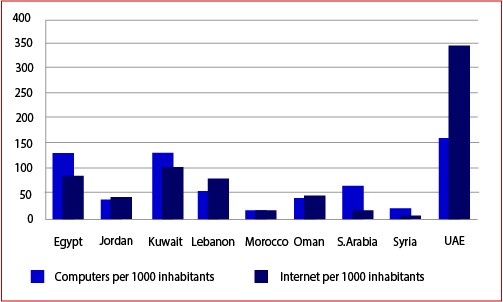 Sample Answer:
The provided graph presents data about the computer owners and internet users in nine Arab countries. As is observed from the bar graph, UAE people use internet far more than other Arab people.

According to the given illustration, Egypt, Kuwait and UAE have more than 100 computer owners per thousand people. More than 15 percent UAE population own computers which is greater than any other Arab country’s computer possession. In Egypt and Kuwait internet users’ percentage are about 5.5 and 10 respectively while it is just above 5.5 in Lebanon. Interestingly, UAE, Lebanon, Oman have more internet users than their computer owners.