The maps below show changes that took place in Brandenburg in over a 20-year period from 1990 to 2010. 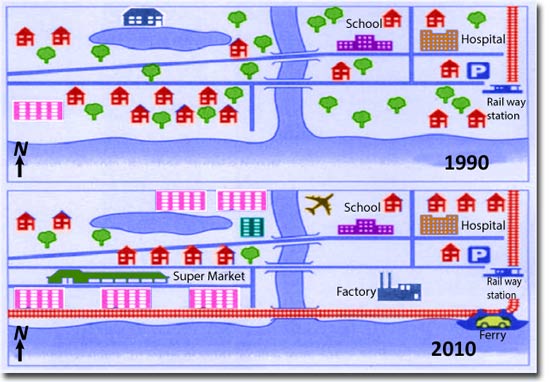 The given illustration provides information on the changes occurred in Brandenburg area from 1990 to 2010. As is observed from the given map, many new modern constructions were established in the area and the number of trees had fallen down significantly.

According to the given map, the changes over 20 years that took place in Brandenburg area are clearly visible. First of all, the number of small housings that were present in 1990 reduced significantly and many of them were replaced by the modern high rising buildings. The number of trees reduced significantly and a new super market was built in the northern part of the area. Among the new establishments, enhanced rail road, factories, super market ferry and a nearby airport are most prominent. The rail road ran parallel to the old high way and connected the east and west part of this area through rail line.

School, hospital and railway station remained at the old positions.