The diagrams below show the changes that have taken place at West Park Secondary School since its construction in 1950. 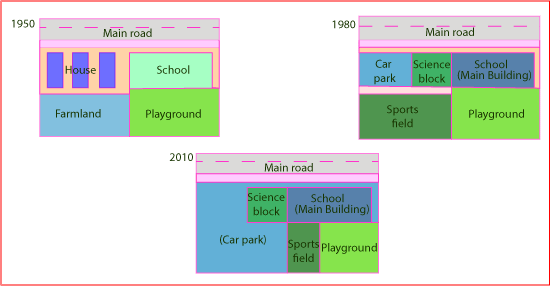 Sample Answer:
The given illustration depicts the changes occurred in West Park Secondary School after 1950. This school was established in 1950 and numerous changes have taken place there till 2010.

As is presented in the given diagrams, the school was established beside the main road and it had four main blocks that were almost equal. These four blocks had school, playground, farmland and house clockwise. After 30 years school main building and playground remained almost same while the farmland was replaced by sports field. The housing areas were replaced by car park and science block.