The diagrams below show the changes that have taken place at Queen Mary Hospital since its construction in 1960. 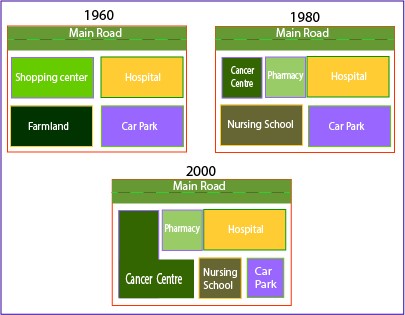 Sample Answer:
The given illustration presents data on the changed occurred at Queen Mary Hospital after its establishment in 1960. The changed are grouped according to three years: 1960, 1980 and 2000.

According to the first rectangle shaped graph, the Queen Marry Hospital had four main and similar size blocks of shopping centre, Hospital building, farmland and Car parking area. After 20 years, in 1980, the shopping centre was divided in to two parts and a pharmacy was established in the half of this area while other half was used to cancer centre. No shopping center was visible at that time. Hospital building remained same while the farmland was converted to nursing school. Finally in the year 2000, the cancer centre was expanded and it occupied the area of nursing school as well as its previous allotted space. Nursing school shared the parking lot as parking lot was reduced to one half. Hospital and pharmacy remained same as it was in 1980.