The three pie charts below show the changes in annual spending by local authorities in Someland in 1980, 1990 and 2000. 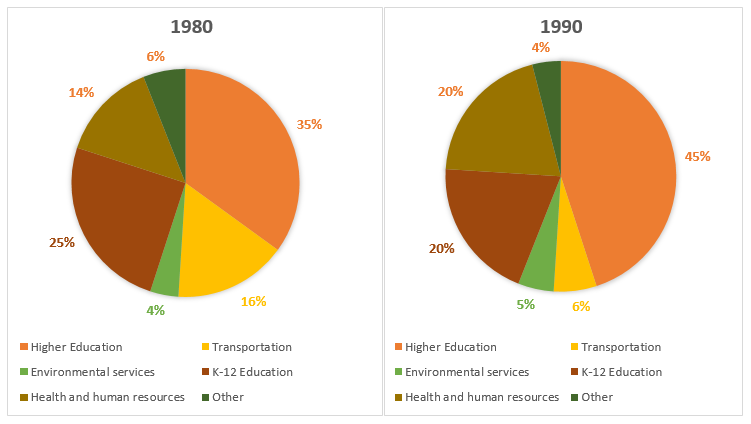 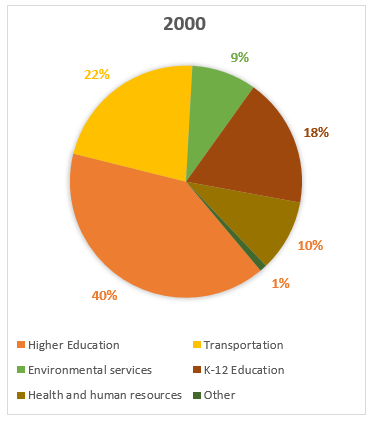 Sample Answer:
The supplied diagrams present the variations of yearly expenditure made by local authorities in Someland for three different years with a gap of ten years. Overall, the expenses on education, health and transportation were the main segments of expenses in Someland.

According to the first pie chart, more than one third (35%) cost was made in higher education, one fourth cost went to high school education and transportation cost was 14% in 1980 in Someland by local authorities. Environmental services and other expensed in this area combined only 10% of the total cost. After 10 years, the expenses made by the local authorities in Someland in higher education increased by 10% and reached to 45%. The expensed transportation reduced to only 6% which was 10% less than that of 1980. Environmental services and other expensed remained almost same while the expenses made on health and human services increased by 6% than it was in 1980.

Finally in the year 2000, the expenses on higher education stood at 40%, transportation in 22%. Other expensed got reduced to only 1% while environmental service related expenses increased by 4% than it was in 1990.