The figure shows the results of a survey of 1000 adolescents in five different countries. The participants were asked at what age they believed certain rights and responsibilities should be granted to young people. 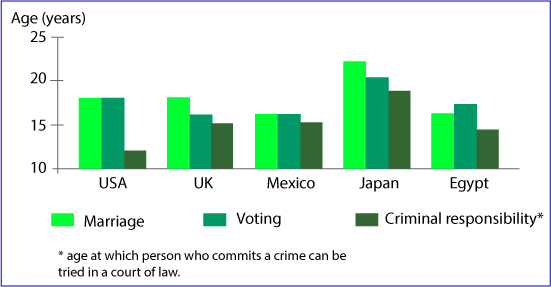 The provided illustration gives information about the outcome of a survey of one thousand young people in the USA, the UK, Mexico, Japan and Egypt regarding their belief for the right age on rights and responsibilities that should be granted by them. Overall, Japanese adolescences believed that it requires more age to accept those responsibilities than the other four countries.

According to the survey results presented in the bar graph, the right age for marriage based on young generations’ comments varies in these five countries. According to the participants of the USA and the UK about 17 years is the right age for marriage. On the contrary, Mexican and Egyptian young think that about 16 years is the right age for that. The right age for marriage in Japan should be about 23 years according to their participants and that was the highest recommended age for the marriage. For voting USA youth preferred the age approximately 17 while it was about 16 in the UK, Mexico and Egypt. Japanese children think that around 22 years is the right time for voting. Finally for the criminal responsibility which implies the age at which they could be tried in a court varies as well. In the USA this is suggested at the age of 12 which is lowest. In UK, Egypt and Mexico this is suggested to be at age 14-15. Finally in Japan this is suggested to be at 18 years which is highest among the suggested age among the given five countries.