The graph below shows the number of books read by men and women at Burnaby Public Library from 2011 to 2014. 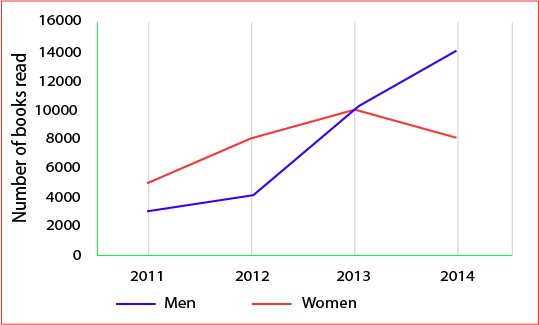 Sample Answer 1:
The diagram illustrates the number of readers by gender at Burnaby Public library for a 4 years’ period. As is observed from the given line graph, men readers’ number increased over time compared to the total women reader in this library though initially more women went to read books there.

Sample Answer 2:
The presented line graph illustrates amount of books read by gender at Burnaby Public Library between 2011 and 2014.

The overall trend in the graph demonstrates contrasting reading pattern between men and women. Women read about 5000 books in 2011, whereas men read lesser by 2000 books in comparison to women in the same year. Women’s reading habit increased gradually up until 2013 to 10000 books, which is also the peak figure for women. However, after 2013, the trend indicates dramatic drop to 8000 books read in 2014.

Overall, the graph reveals positive improvement in men’s reading habit since 2013, while women’s reading trend shows the opposite.